I was digging into AOD.DEFN.F file and realized that only SO4, NO3, NH4, OC, and sea salts are considered in calculating AOD (at 550nm). Is there any reason why BC and dust are disregarded? This output will lead to a huge underestimation of AOD in comparison to satellite observations. I’ve attached an example for Europe for the case study I’m working on. 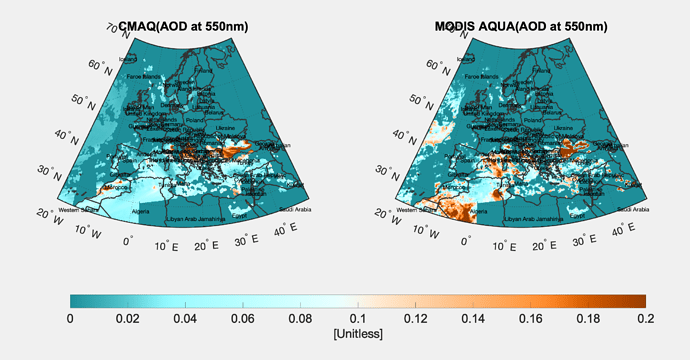 The calculation of AOD in AOD_DEFN.F includes all aerosol species and does not disregard BC and dust.

The images you posted likely point to an underestimation of windblown dust in your simulations, although comparing the AOD approximation using the IMPROVE reconstruction method to the MODIS AOD product also has some inherent uncertainty.

Note that the use of the IMPROVE AOD estimation method was discontinued in CMAQv5.3 and aerosol extinction information including AOD can now be obtained from the PHOTDIAG files as mentioned in this thead.

It makes sense now, thanks for your thorough answer.

I think one idea would be to include Mie’s calculation (for spherical particles only) to be able to rigorously calculate Qext for each specie. The AERONET inversion product provides particle size distribution and refractive indices to test against (or even to synergistically include them in the calculation). I have some python/fortran codes (aeronet reader, passing aeronet information to mie, and mie calculations) for this task if anyone is interested. Additionally, we have implemented T-matrix calculation for non-spherical particles as long as you have the factor of non-sphericity (or the shape of the particles.

For the aerosol extinction calculations in the CMAQ inline photolysis module, users can select to perform the calculations using full Mie theory and a core-shell assumption by setting the environment variables OPTICS_MIE_CALC and CORE_SHELL_OPTICS to true in their run scripts (see user guide Appendix A). These options were introduced with updates to the inline photolysis module in CMAQv5.1 and their effects were analyzed in a 2015 CMAS Conference presentation.

As noted in my response above, results from the aerosol extinction calculations performed in the inline photolysis module can be obtained in the optional PHOTDIAG diagnostic output files.