I have been customizing the CMAQ v5.3 run script to run for SOAS 2013 case and i see there are some differences in emissions (more Sector-wise classifications in v5.3 compared to v5.2.1. inputs we have) and meteorological inputs, since we are using the v5.2.1 inputs from the SOAS 2013 Google drive.
Just wanted to double check that we are not missing anything by trying to run CMAQ v5.3 with these SOAS 2013 inputs configured with v5.2.1.
Is there SOAS 2013 Input data available configured for CMAQ v5.3 run?
I have condensed the differences i noticed with questions into this table where highlighted inputs are those that v5.3 has that v.5.2.1 does not: 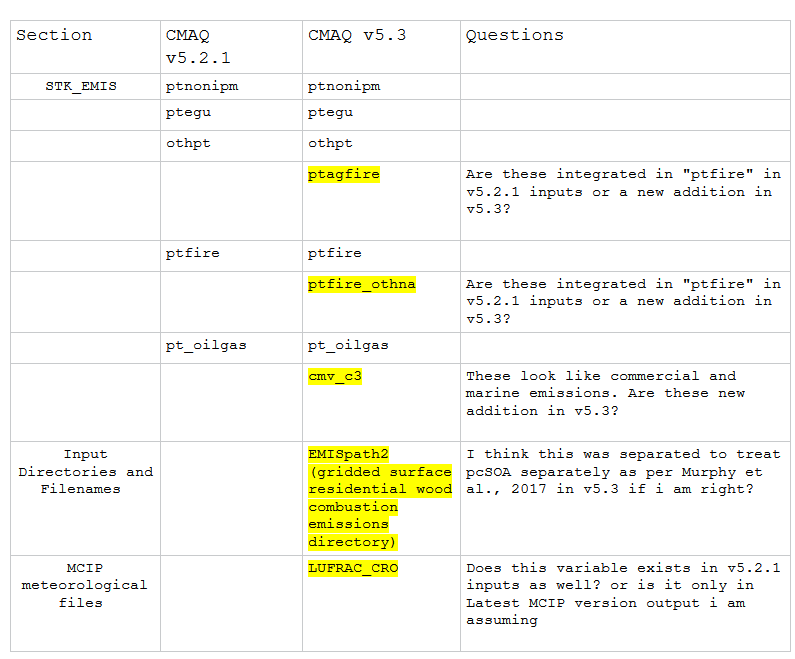 Thank you for your questions regarding the differences between CMAQv5.3 and CMAQv5.2.1.

The answer is yes for all of them, except for the question about whether the LUFRAC_CRO variable exists in the v5.2.1 inputs. That variable is not available with the CMAQv5.2.1 release.

The LUFRAC_CRO variable is a new variable with the new MCIPv5.0 release, which is distributed as part of the CMAQv5.3 release.

Quazi, there is no error in the log file you uploaded (for processor 615). Is there anything in any of the other log files (try grepping for ABORT) or the overall log file? If none of those have any information then I’d try recompiling in debug mode (your problem occurs almost instantly, so performance is not an issue), and then if that doesn’t illuminate things, then try running under a debugger.

I am using 44 procs-per-node with 14 nodes, will try that.
I am also re-compiling by setting the Debug_CCTM option in bldit_cctm.csh (which i think was commented earlier)

After running on DEBUG mode, i get this ABORT message and the terminates right at the start:

Have you tried running again using the optimized compiled version? I have had trouble running in debug mode on dogwood.

Hi @lizadams, I was wondering how one can run the ‘optimized compiled version’ of CMAQv5.3.2 if the debug mode does not run?