When I create a VERDI 2.1.3 plot using a shell script the legend on the plot is offset to the side and gets partially cut off in the display window. When I create a plot from the VERDI GUI this doesn’t happen. This wasn’t an issue with previous versions of VERDI. See the attached screen shot as an example.
Please advise. 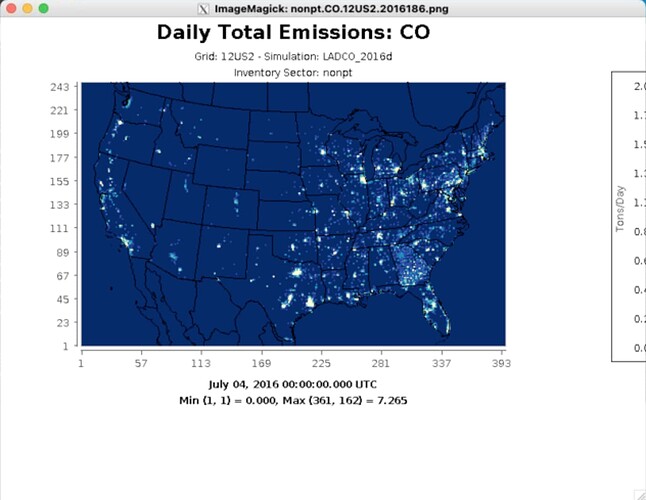 Hi @zacadelman,
Thank you for your post. The VERDI development team has been alerted of this issue and is working on a fix to include in the next VERDI release which should be available soon.

Thank you for your post. We have quickly tested the newly built with our test input files and don’t identify the issues. It could be only the VERDIv2.1.3 issue. To make sure the problem will not appear in the upcoming release, could you please send me your input and the script files for us to have further test. You can directly send the files to my email: kang.daiwen@epa.gov.

I’ve confirmed the issue that you are seeing, and have added a file with instructions that the developer can use to test and fix this issue. VERDI legend placement · Issue #307 · CEMPD/VERDI · GitHub

In the meantime, the best solution is to only use 1 subtitle, rather than 2, as the second subTitle seems to be pushing the legend out of the image window.