I succeed to run without using SLURM
But I tried to run CMAQ, using SLURM but the SLURM doesn’t work with /bin/rm error message. 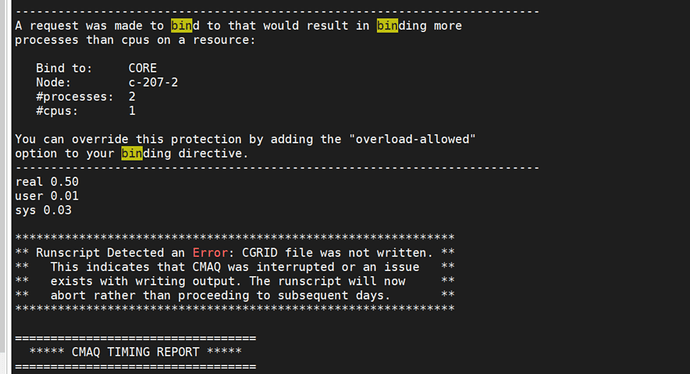 The error may be due to your SLURM settings.
The message in the first screenshot says that you are trying to run 2 processors on 1 cpu.

The relevant section of your run script may look something like this:

However, if your system only has one processor per node, then you would need to change the SLURM setting to use 2 nodes and 1 task per node.

Or you can try to use hyperthreading, and run two processes on one cpu, by changing the mpirun command to include the suggested option.

Change this line in the run script

If you use hyperthreading, be aware that this may negatively impact the run time of the job.

I changed as you mentioned but failed to submit

In this case, you need to look up the queue policy. For the 528_queue that you are submitting to, there is a minimum CPU limit of 45 tasks.
You could either try to resubmit to the debug queue using the following:

See the Table of Limits in the following link:

Since these limits are continuously being evaluated and revised, our goal here will be two-fold. One, to give a snapshot of the limits at this point in time, and two, to provide the commands to query what the current limits … Continued

Should I change this?

NPROCS needs to be set to be equal to be less than or equal to the number of requested tasks in your slurm settings.

Hi Liz, what should I do for the specific case where my runscript reports:

While the runscript attempts to gather and keep track of timing metrics for you it is not a necessity to run the model. If your system does not have the time command please amend the runscript:

Thanks for the response, but it fails to run and outputs an error message that is slightly different from the former:

@bambila1 the run is dying somewhere within the CMAQ code itself. I don’t think it has anything to do with the execution id.

When running a CMAQ job in parallel, there is a “main” log file, and “ancillary” log files output by each processor. By default, these have names like CTM_LOG_000…, while the main log takes on what is written by the slurm output.

The main log message indicates that process 0 (“MPI_ABORT was invoked on rank 0 in communicator MPI_COMM_WORLD”) aborted, so check the CTM_LOG_000 file. There should be a “PM3EXIT” error message at the bottom.

For both /bin/time and /bin/rm, it is possible that the commands are in a different location.
Please try removing the path, and allow the model to find the command if it exists.

and change the rm command from

I checked the log files and saw that some file paths for my application (eg. bi-directional ammonia) were wrong, so either I had to set the flags as ‘N’ or specified the appropriate paths.