I notice that there is a table called ‘3-22 Off-Network Mobile Source Surrogates’ however the text descriptor says that on-network (RPD) data and off-network (not clear if it means just RPV, RPH, RPHO, or all) use these spatial surrogates. The text in the SMOKE v 4.8 release says that the new feature in movesmrg for ONI is based off of parking lots, distribution centers, and other off-network spaces, which is not explictly referenced in Table 3-22, though perhaps the NLCD all-development uses that?

“For the onroad sector, the on-network (RPD) emissions were spatially allocated differently from other offnetwork processes (e.g., RPV, RPP). On-network used AADT data and off network used land use surrogates as shown in Table 3-22. Emissions from the extended (i.e., overnight) idling of trucks were assigned to surrogate 205, which is based on locations of overnight truck parking spaces. This surrogate’s underlying data were updated for use in the 2016 platforms to include additional data sources and corrections based on comments received” 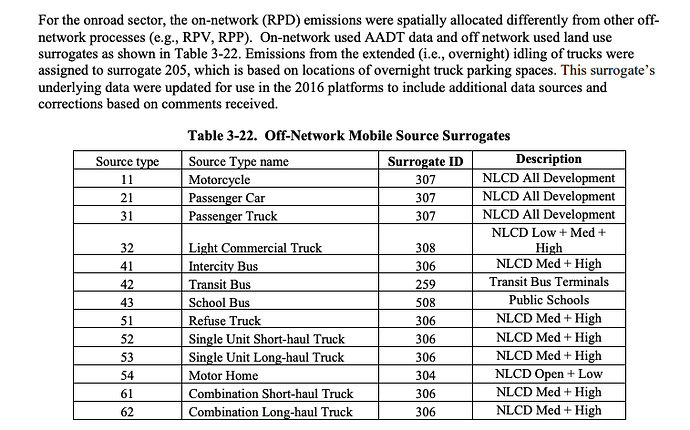 Yes, it was an oversight that we did not mention ONI spatial allocation in the 2016v2 TSD. Here is the new sentence from the upcoming 2016v3 TSD: