While viewing the MET example on the official AMET github website, I found a strange discrepancy in the range of wind directions from the output of the “run_summary.csh” script.

Does anyone know why this is the case? Is there a typical / acceptable range for the RMSE (or the other model performance summary statistics) of wind direction? In a separate analysis using different WRF data, I get a wind direction RMSE value of about 90. 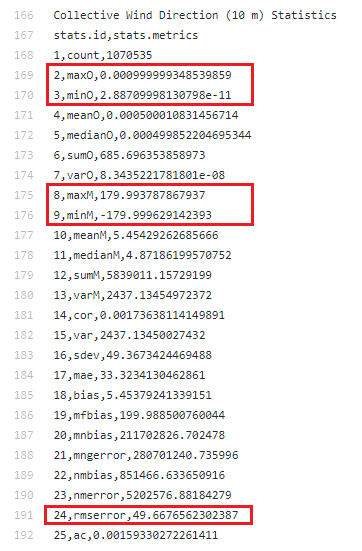 Any assistance would be greatly appreciated,
Rowena

You bring up a good issue. And it needs to be made much clearer in our next iteration. I will put it on the list of AMET updates.

We see MAE in our best modeling for a US domain on the order of 30 deg. High 30 deg range is larger than typical. When it drops into the 20 deg range that is very good from our experience.

With that said, these issues should definitely be made more well known. And these statistics like min and max should be set to NA or missing because they are irrelevant. The correlation is also irrelevant in this regard.

Feel free to contact me directly if you have further questions (gilliam.robert@epa.gov)