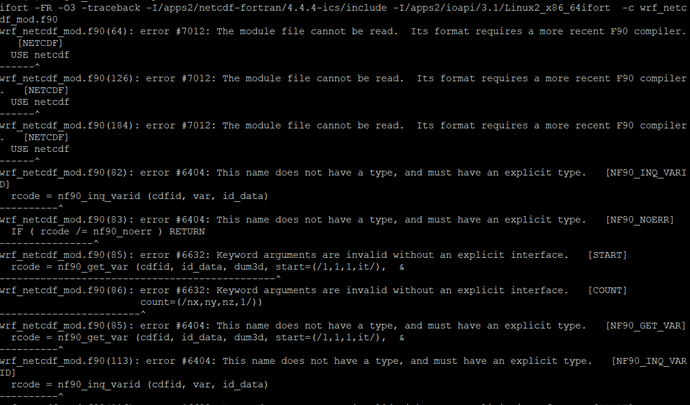 Anybody can help with this? Thank you.

In general, you are best off if you can build the whole modeling system (libnetcdf.a, libpvm3.a, libioapi.a, and your model(s) CMAQ, SMOKE, etc. with a common compiler set and common set of compile-flags. When this is not done, there are a number of compatibility issues…

…and this is one of them. Re-build the netCDF with the same compiler and compile-flags that you are using for CMAQ.

I’m a sysadmin who helped Yukui finally get CAMQ compiled on our cluster. I just wanted to report some of the experiences we’ve had with the installation and build process in the hopes that some of the shortcomings might be considered and addressed. The experiences are ordered from specifics to more general observations.

By default, 53 different Linux link-types are supported (and this does not account for user-customization to support multiple versions of each vendor’s compilers which may be installed). By the time you do that, it’s a nightmare of a combinatorial explosion.

BTW, the “module” approach does not come close to scaling to the number of different link-compatibility-types that come up. On the primary UNC server, I am by default building (an abbreviated(!) set of) 14 distinct types, used by different portions of the user community for different (production vs R&D vs development) tasks.